So when you were a kid, did you ever make those woven paper mats where you sewed two together with newspaper in between and then it was a nice little mat so you could sit on the floor? I think I made one at summer camp once :) That memory was the inspiration for this project -- I made a journal cover out of woven paper several months ago for some dear friends, and decided to make another one as a tutorial :) 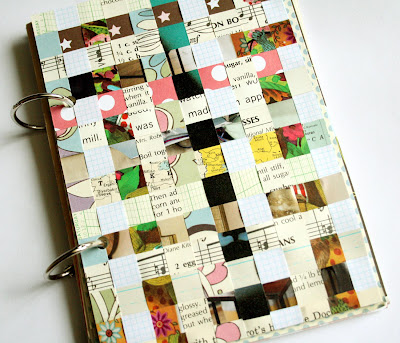 This project is great for using up scraps of paper that are long, but too skinny to really do anything with. I had some larger sheets of scraps and decided to cut those down into strips for the project. It's a little tricky, and a little time-intense, but the result is worth it :)

I made my journal cover 5"x7", so all measurements are for making that size. You could make one larger or smaller. I've made one as large as 8"x8", but I'm sure you could easily make a 12"x12" :)
Supplies:
- 1 piece of chipboard - 5"x7"
- Ruler, rotary cutter and cutting mat (or you can handcut your paper strips with scissors
- Adhesive- I suggest rolling permanent adhesive or double sided tape
- Assortment of paper scraps (I used leftover scrapbooking paper, magazine pages, leftover vintage papers such as dictionary and cookbook pages, music sheets, graph paper) 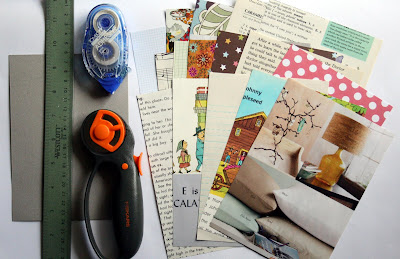 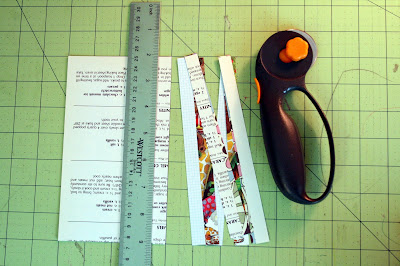 and you will need about 14 -- 5"x½" strips. Feel free to use all different papers for each strip depending on what scraps you have- you would have 24 different papers in your journal cover! :) 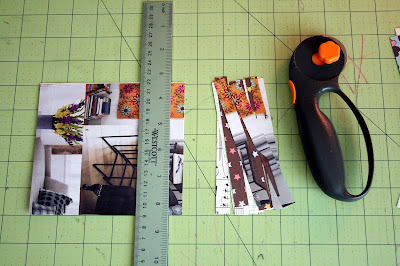 I had a bunch of strips after I cut the sheets down, enough to make more than one journal cover. 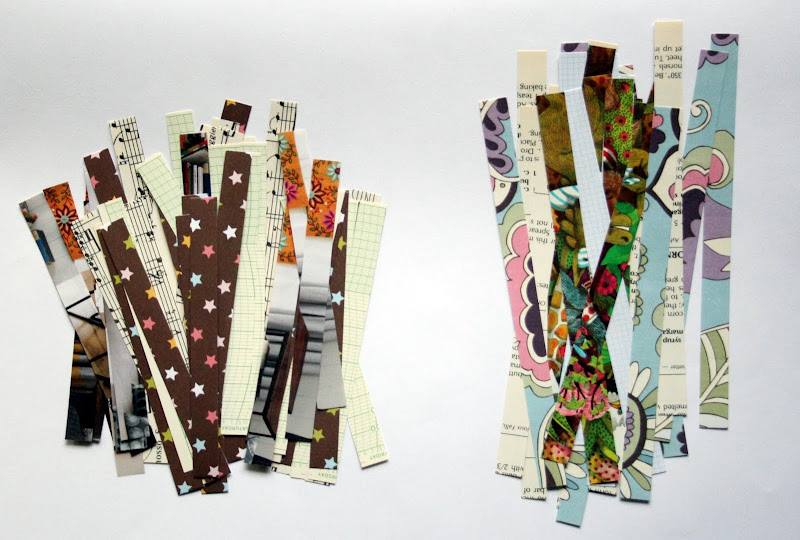 Next, put a strip of adhesive along the top of the 5" side of the chipboard (see arrows). 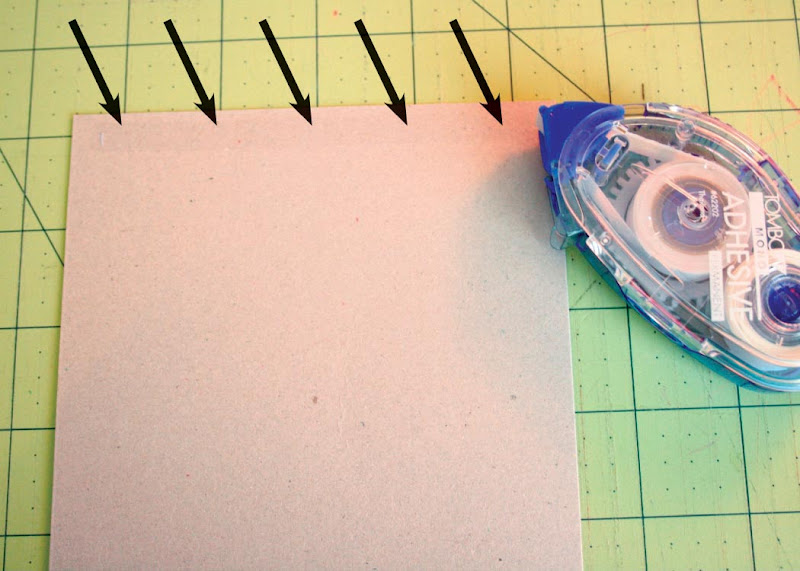 Now here's the tricky part (the pictures will probably explain best :)). Picture 1: Take a 7" strip and press the 1/2" side firmly along the top, so that it is flush with the top and left side - we'll call this the 7" edge strip. Then, put a dab of adhesive at the top of the 1/2" section of the paper you just adhered. Take a 5" strip, and put it on that dab of adhesive so that it is flush in the corner. Picture 2: Put a dab of adhesive at the top on the strip you just adhered. Now, take another 7" strip and adhere it to the dab so that it is flush at the top and next to the other 7" strip. Pictures 3 & 4: Keep repeating this process until you come to the end. Each strip will start out either over or under the 5" strip - over, under, over, under, etc. It is important that the strips are butted up next to eachother as tightly as possible without overlapping. To keep the 5" strip from sticking to the adhesive while I was weaving, I used a pen to keep it in the air (brilliant, I know :)). 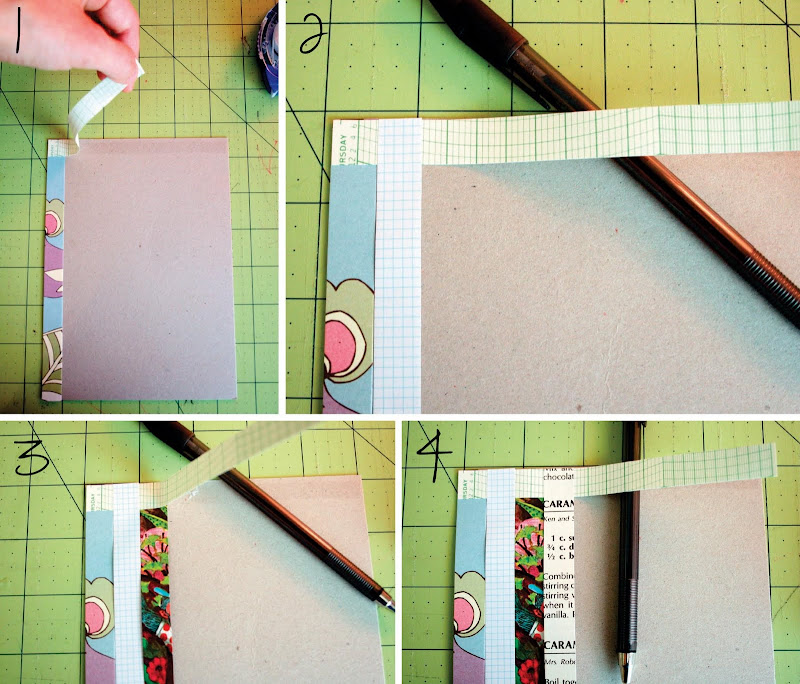 Next, put adhesive on the chipboard as the picture below shows- this strip will start out underneath the 7" edge strip. Attach the edge of the 5" strip and begin weaving. At the end, put a dab of adhesive to the strip to secure it in place. 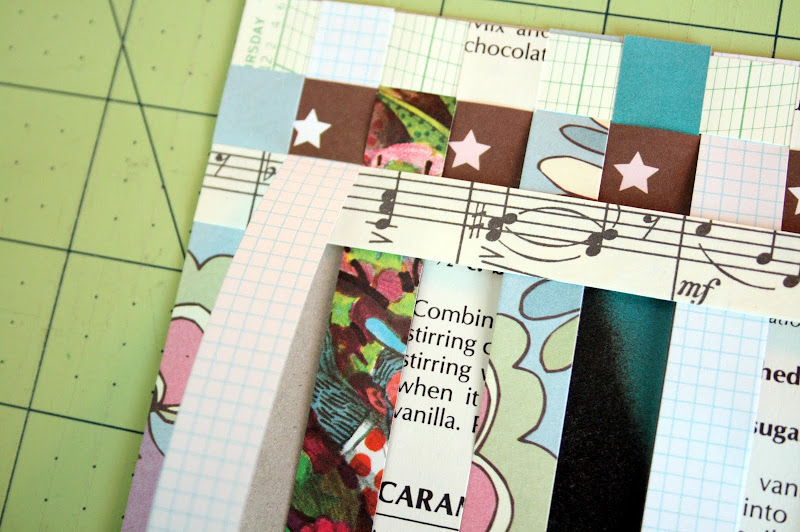 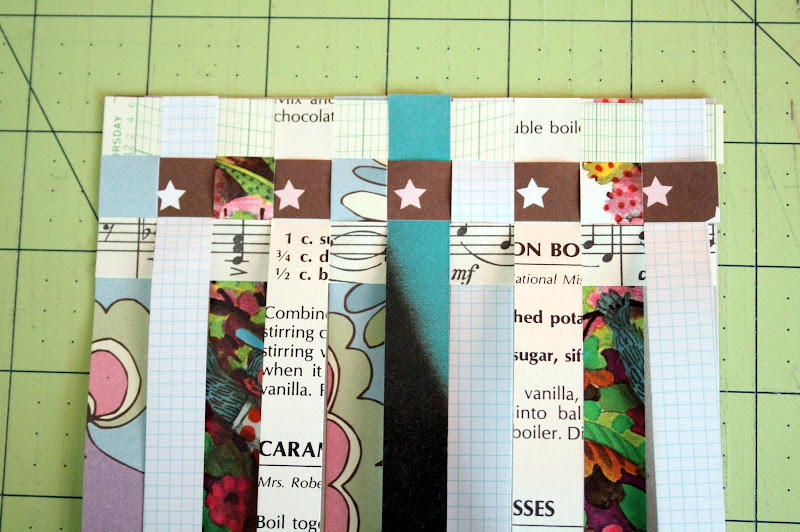 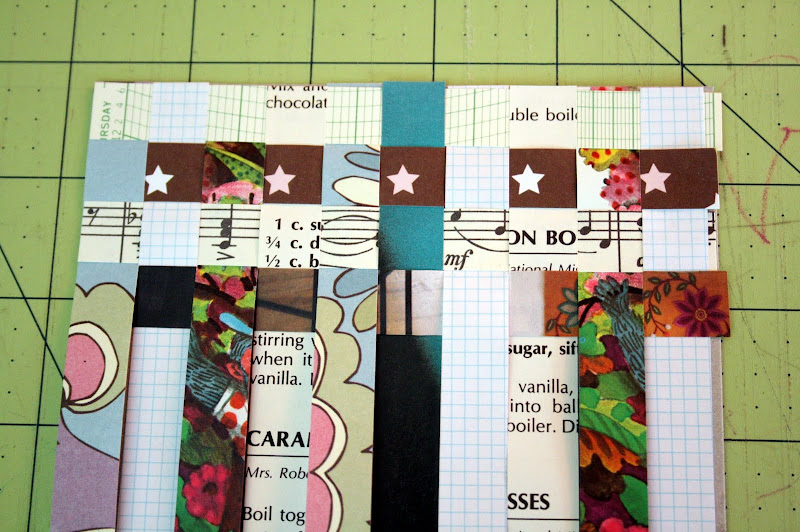 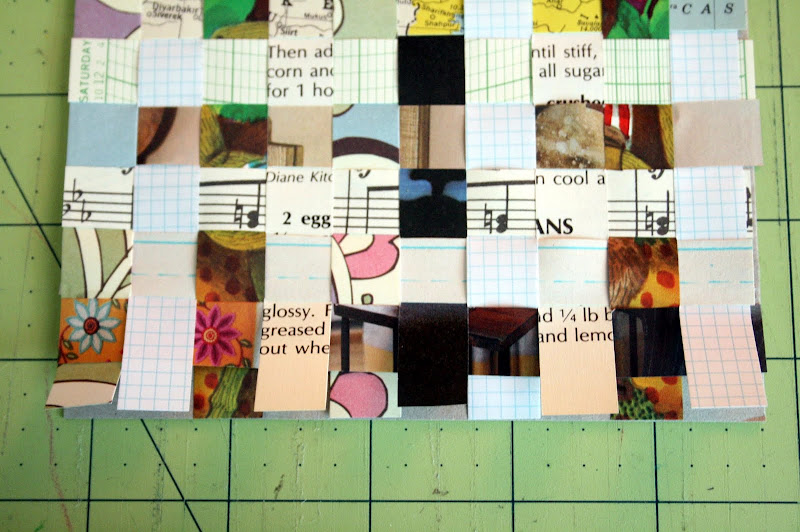 Keep weaving until you come to the end. At the end, I gently held all the edges up and put another strip of adhesive along the bottom of the 5" side of the chipboard. 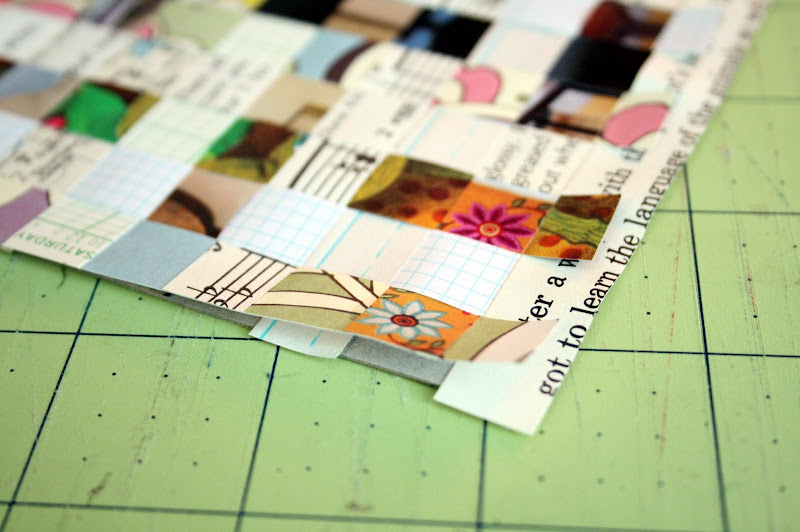 Next, weave in your last piece and then touch up around the edges with dabs of adhesive to secure all edges. I then trimmed off access on the edges to make them all flush. 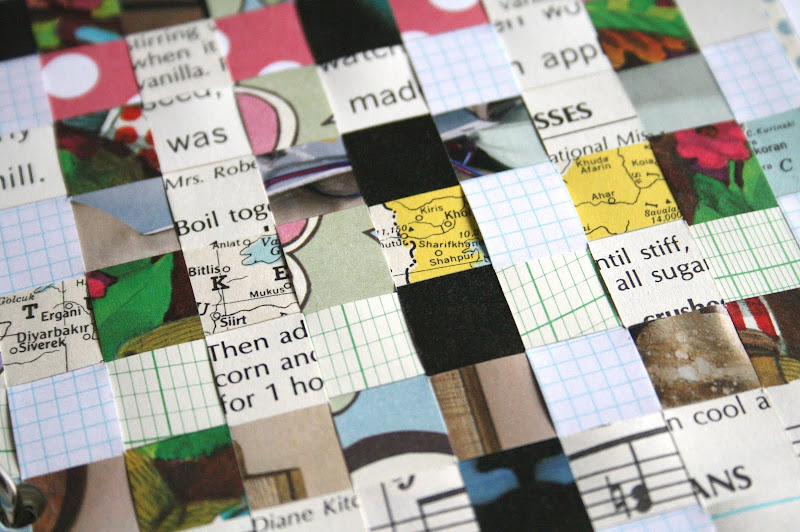 Close-up of the woven paper. 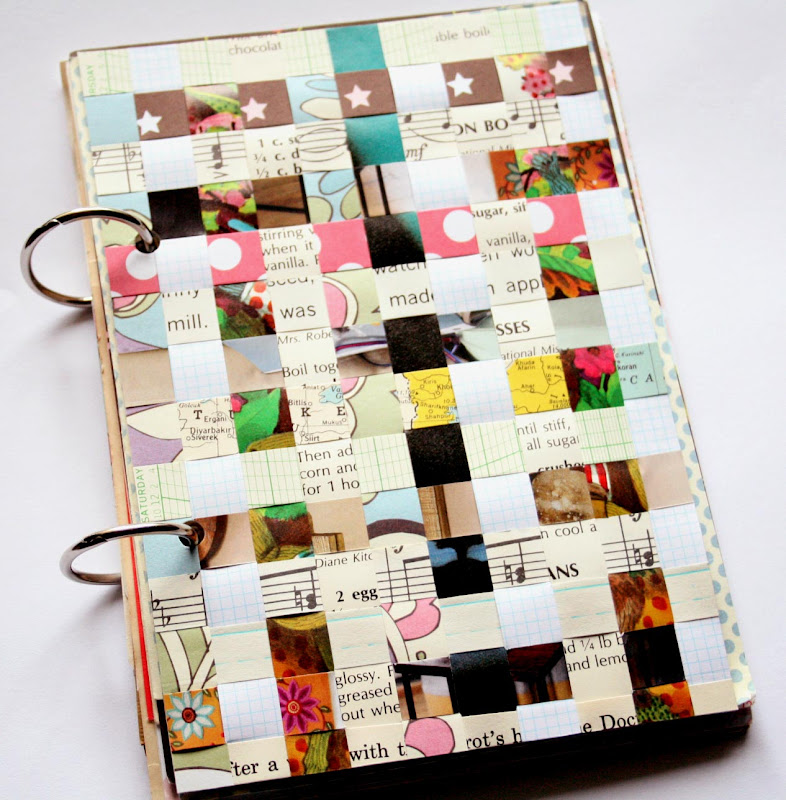 I used mine as an art journal cover, so punched two holes and put the binder rings through. 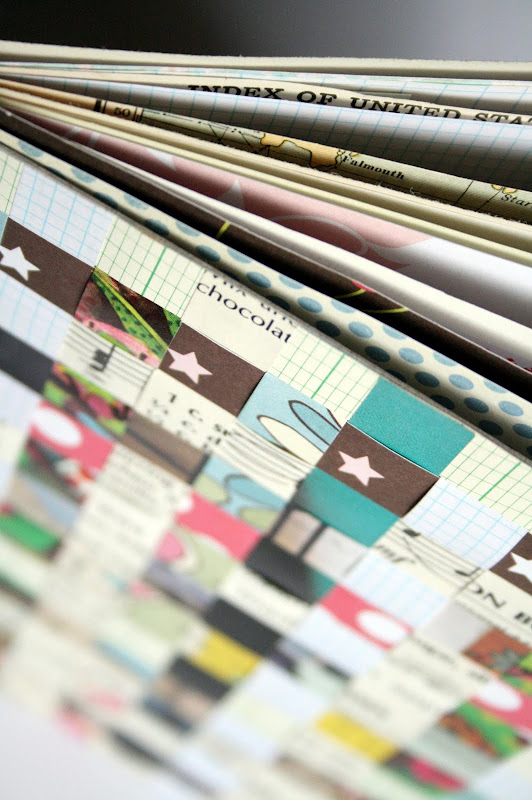 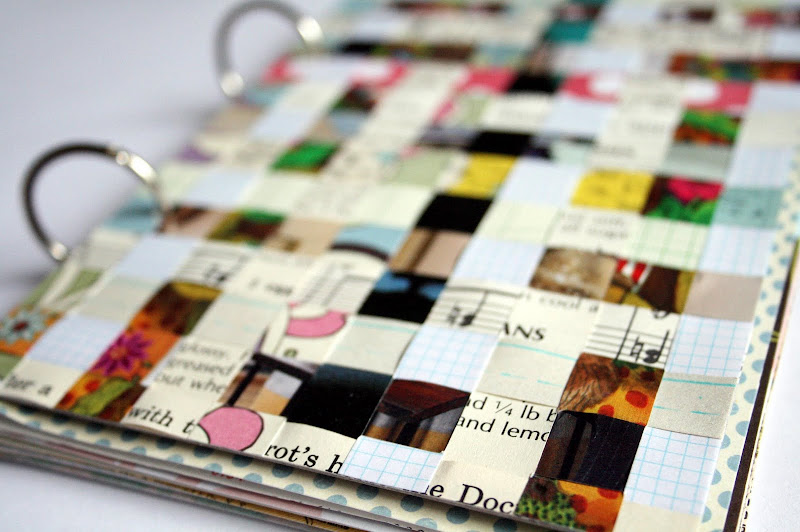 The woven paper journal I made several months ago :) 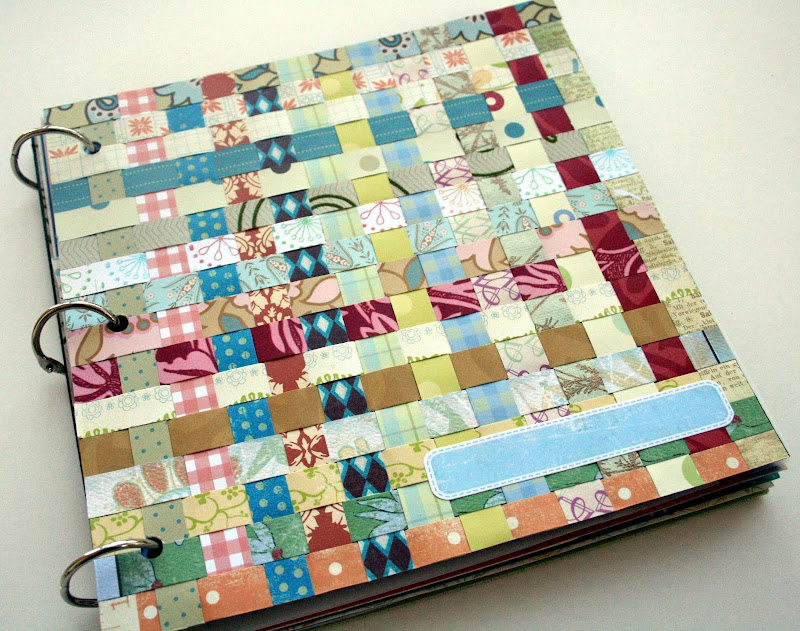 Posted by The Creative Place at 1:30 PM

Hi! My name is Ashley. 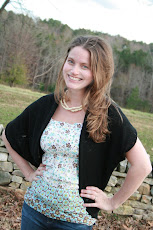 Welcome to The Creative Place. The Creative Place features the art and craft of me, Ashley Connelly: crafter, graphic designer, consignment shop shopper, and now (novice) gardener. I am a lover of paper, fabric and most anything vintage. This blog is a creative outlet to share about things I'm making, recipes I'm trying, bits and pieces about my sweet family and fun ideas, projects or products I've found online.
It is my hope that you will find some ideas, inspiration, crafty goodness and fun(ny) stories here. Thank you for visiting this space.

All photos and words on this blog are my own unless otherwise stated and/or linked. Please link back to my blog if you use a photo to provide credit, and please do not use any copy from my blog unless you have permission from me to do so. All tutorials are for personal use only.
Please feel free to email me with any questions. Thanks!
thecreativeplace (at) gmail (dot) com 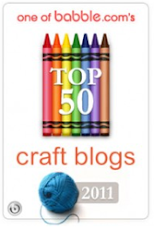